Men and Depression – The Common Signs

Life is full of ups and downs. It’s normal to feel sadness, loneliness, or grief and feel down from time to time. Going through difficult life experiences is part of being human.

Most of the time we continue to function and our emotional resilience will enable us to bounce back.

Depression is different than just having an ‘off day’

When emotional, physical or behavioural experiences become excessive, interfere with normal routines like work, sleep or leisure, and continue on most days for 2 weeks or more then we are entering into the territory of depression.

Some examples of symptoms that need attention are:

The extreme end of depression for men

The current data suggests Australia’s suicide rate has actually dropped. However, men are still 4 times more likely than women to kill themselves, according to the Australian Institute of Health and Welfare.

Suicide ranks second to heart disease in its contribution to potential years of life lost by Australian males (Australian Institute of Health and Welfare, 2010).

The reasons for depression in men

Most of the time it’s a combination of factors over a prolonged period of time that has a major impact on a man’s mental health.

There are many issues that may trigger depression:

In general men are far less adept at recognising their triggers and symptoms than women.

A man is more likely to:

It’s vital that men begin to recognise their own signs,

The Common Signs of Depression in Men

Men tend to have common symptoms that may indicate depression.

There could be a range of experiences including:

A man suffering from depression may start exhibiting escapist or risky behavior. This could mean pursuing dangerous sports, driving recklessly, or engaging in unsafe sex. You might drink too much, abuse drugs, or gamble compulsively.

Help is never far away. Whether it’s talking to a friend, partner, family member, local doctor or therapist, men can and do recover and thrive beyond depression. 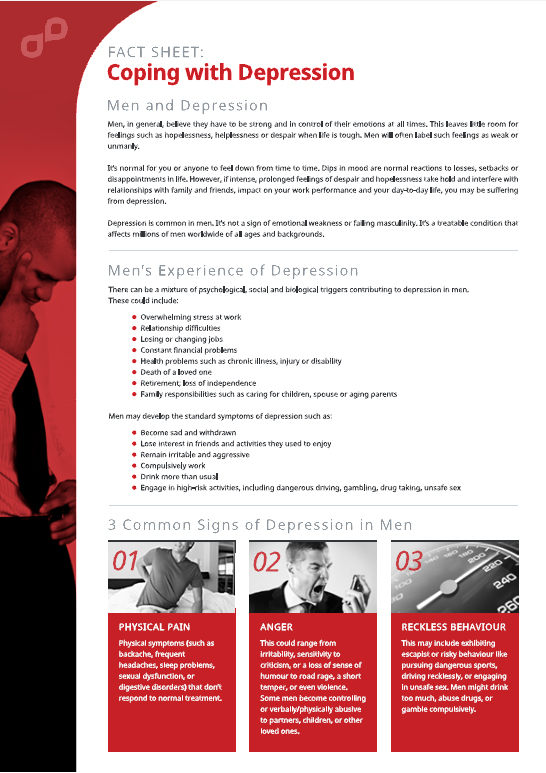 Howard is the director and owner of Men and Relationships Counselling. He passionately believes that given the right space and environment, men open up and talk about their lives in a way that empowers them to take steps to change.
He has a strong connection to the growth of men, with over 15 years experience in designing individual and group programs for men and fathers as well as facilitating human relations groups.